As you are well aware of the sequences of what the country has been through in last couple of weeks. The last and we hope THE LAST event, the rain and the floods breaking all the records of the decades. […]

As you are well aware of the sequences of what the country has been through in last couple of weeks. The last and we hope THE LAST event, the rain and the floods breaking all the records of the decades.

We at Rawalpindi Club had the meeting to discuss and work out how to tackle the problems.

We identified the items required and hurriedly collected the funds which were so generously contributed by our club members and some were raised from the friends of our club members. We reached an amount of Rs.235000/= 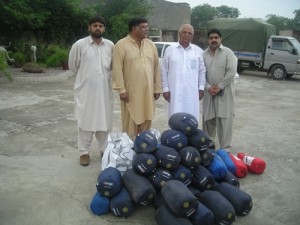 Now our team Rtn. Rashid Mashkoor (Secretary Rotary Club Rawalpindi), Rtn. IPP Munir Ahmed and Rtn. Nosherwan Khalil Khan started working on the purchasing, that is, getting good price for all the items, hence making the small amount to fetch the maximum benefits to the affectees.

Next step was to locate the most needy and safe place to distribute the goods. We had a good search and came out at the end a place known as AMAN KOT in District Nowshera which is close to Peshawar and is on the GT road. The RIVER KABUL flowing some three Kilometer from the spots we were going to visit. We could very well imagine the damage done by the flood.

Now the GT road is open and on FRIDAY 6th August we went along with the truck load of items such as food items tea sugar etc. sleeping bags, silver cooking utensils, plastic kitchen ware, we also arranged 900 water bottles of five liter each which were purchased at a very good price.

We went to three places in Aman Kot and were shocked to the see the devastation created by the flood. Three Hundred (300) mud houses were knocked down to the ground by the eleven feet water and every body sitting and waiting for the help.

We were told that we were the first one to reach them, of course they were located off the GT road and were almost impossible to locate them since there was nothing at all except some house hold items scattered around and some rubble on the ground.

They lost every thing, their animals were taken away by the flood water and they rushed to safer locations to save their lives.

A very touching story of MR. DILAWAR who was standing in the queue to collect some food items and water:
We were told that he was the richest man in that localities and lost 48 buffaloes and one HIACE van which amount to approximately Rs. 5,000,000= Rupee five million. We were deeply saddened by this and there was nothing more than to console him.

There was destruction all over the place some dead animals lying around and every body covered in mud but people appreciated us visiting them and handing over some help.

We were accompanied by a doctor and that was a very right decision since almost every body had skin problems and their feet needing attention, they were vaccinated and some medicine given as required.

One thought on “Flood Relief Phase 1”

We meet every Monday at 6:00 pm at Pearl Continental Hotel, Mall Road, Rawalpindi. You are invited to attend our meeting.